When it comes to designing a kitchen, every single detail matters. Those of you who want everything to be perfectly designed and organised need to think in advance about the things they plan to add in the kitchen. When it comes to adorning the sink and its surrounding, kitchen taps seem to be pretty important. Nowadays, they are available in a range of types, styles, models and heights, so choosing the right one will be a piece of cake. And although there are lots of kitchen taps to choose from, interior designers recommend choosing them wisely. According to them, the one you choose can mainly depend on your needs, kitchen style and colour palette. Since taps are one of the few kitchen items that’ll be used on a daily basis, they need to be durable and hard-wearing, yet practical, stylish and functional. That being said, considering the several types of kitchen taps is also essential. 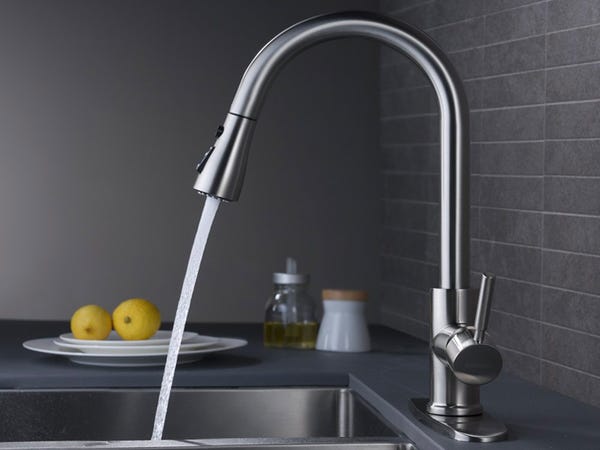 When talking about the most popular types of kitchen taps of all time, we must stop and mention high spout taps. Also known as single lever taps, usually they are most commonly available in the form of mixer taps with a single spout. They are characteristic for their long-sized gooseneck spout, which gives the sink a more stylish look. The long spout of this type of kitchen tap gives you more freedom to work in the sink and around it, while allowing you to stack bulkier dishes when needed. When it comes to choosing the right shape and height, they are available as industrial, designer, low-profile and curved high spout taps. Out of all types, the curved ones seem to be the most common shape as it has a simple and minimalist looking design. Like any other types of kitchen taps, high spout taps also come in a range of finishes like chrome, stainless steel, brushed and coloured metal. 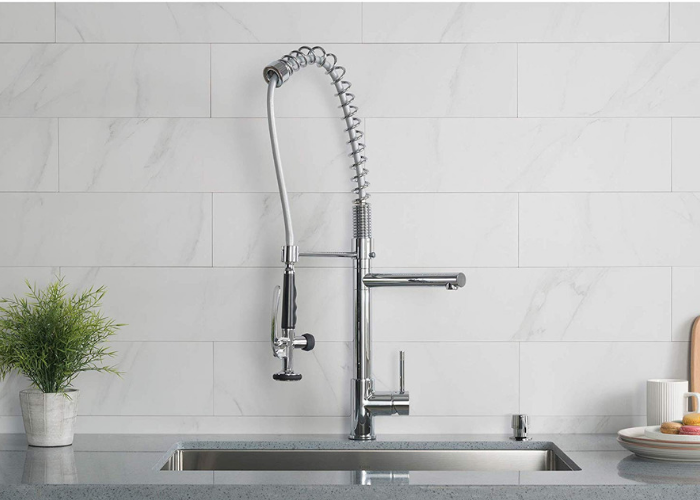 Another type of popular kitchen taps available on the market is the pull out taps. The thing that makes these taps practical and extremely popular all over the world is their retractable spout which purpose is to be pulled out from the tap’s base. Although these kitchen pull out mixer taps can be used in every kitchen, they are particularly useful in the smaller ones. For those who are not familiar with this type of kitchen taps, the spout of kitchen pull out mixer taps resembles a lot of a showerhead, only smaller in size. They allow being easily pulled out and put back in their primary position without a problem. One of the main benefits of kitchen pull out mixer taps is that they are extremely flexible and practical. When needed, all you need to do is to pull the hose out and use the spout in any direction you want/need.

Just like the other types of kitchen taps, these are also available in a range of styles, designs, shapes and finishes. However, over the past few years, chrome, matte black, bronze and stainless steel seem to be the most commonly used among Australian households. Except for the mixer type of tap, the pull out kitchen taps are also available with separate spout heads. Because the water runs like in the shower, with high but evenly distributed pressure, these taps are ideal for washing dishes with stubborn food leftovers. Although usually used in bathrooms, wall-mounted kitchen taps are available in kitchen forms as well. As the name implies, these taps are installed directly on the wall above the kitchen sink, allowing you to have lots of free space on the sink. They are also available in a range of finishes, styles, shapes, sizes and colours, which is great. They are available both as a mixer and as a kitchen tap with separate spouts. One of the biggest disadvantage is that these taps require a wall outlet to be made at the exact place where the tap should be placed. Unfortunately, these types of taps are not that common these days, mainly because of the pull out mixer taps’ beauty, appearance and practicality. If you don’t have any, plumbing work will be needed which can be quite expensive. Another drawback of wall-mounted kitchen taps is that they are more expensive than some other types of kitchen spouts.

Without a doubt, all of these kitchen spouts will add a touch of personality and style in your kitchen, but when it comes to functionality, nothing can beat the pull out kitchen taps. Now, when it comes to choosing the right one, experts recommend considering the household size, your eating habits, pans and utensil washing requirements. As already mentioned, considering the overall kitchen style is paramount, but you should also consider how much free space you have. All these things can help you a lot when it comes to making the right kitchen tap choice.

Previous Entries Accessorising Your VW: Essential Parts Explained Next Entries Deodorants Vs. Antiperspirants - Which Ones Should You Use