October baby is a teen romance/road trip movie. At first glance, viewers may think this is a story about coming of age or self-acceptance. Such viewers would be surprised because this movie is actually a pro-life tract about the-the girl who survives a failed abortion and goes in search of her birth mother. Brothers Jon and Andrew direct October baby movie, going through the footsteps of Sherwood Pictures, producers of the Christian-themed movies Courageous, Facing the Giants and Fireproof. But, this story is more about the reaffirming of faith or redemption. It is a movie with an extreme agenda. 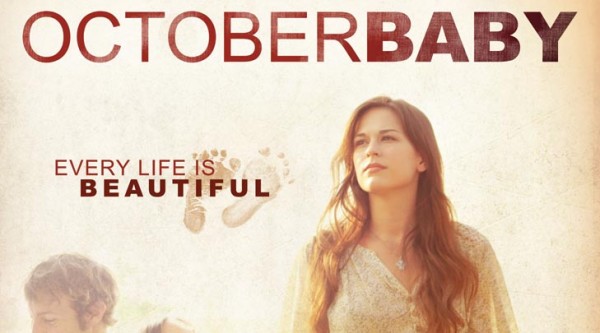 Rachel Hendrix plays a petulant, sheltered college student who is fighting with health problems in her life, including seizures, hip surgeries, and asthma. When in the middle of her firs school performance, she collapses, Rachel spirals into a depression that leads to finding out that all those issues are results from her premature birth. She find’s out that she is adopted after she was abandoned by her biological mother, who have unsuccessful attempt to abort her. Then she starts to feel that is unwanted and that she have no right to exist.

After she finds out all these stuff, with a desire to give her help, Jason Burkey, her best friend, takes her on a trip to Mobile in order to find her biological mother. What fallows next is a pro-life revenge fantasy in which unsuccessfully aborted fetus survives to adulthood and show up unannounced in front of the women who conceived her, looking for an explanation.

October baby is a movie which is inspired by the story of Gianna Jessen, a pro-life activist, and actual abortion survivor. During the road trip, strangers lend their help to Rachel, no one ever making her feeling doubt to confront the women who were wicked and selfish to leave her after the birth. The most extreme part of the movie is the suggestion that edge-of-viability and late-term procedures are the norms and that clinics that provide abortion are such a horror places of discarded and maimed infants.

October baby brings a powerful message about the damage abortion does to everyone, the necessity of forgiveness and the value of life. The chirpy and cheeky road trip shows that do not always compliment the gravity of the core subject, but it is impossible to miss the redemptive emphasis on forgiveness. A forgiveness empowered and inspired by Jesus’ gentle treatment of all us.